What is Indoor Netball?

Traditionally known as a sport for women, Indoor Netball has become one of the most popular mixed team sports in Australia. As more and more ‘spectator’ husbands, boyfriends, friends and brothers are getting off the sidelines and onto the court, our mixed teams now match our ladies in team numbers at Northside Indoor Sport & Fitness. Most of the rules of Indoor Netball are similar to the traditional outdoor version, but for those who have never played, the basics are:

7 players per team, each with a designated position and zone of the court they are allowed to move within (mixed teams are allowed a maximum of 3 guys – min of 2)
Extra players are allowed, but substitutions can only be made between quarters
Each match consists of 4 x 9 minute quarters (players may change positions during any quarter-time break)
Netball is a non-contact sport and defenders must remain 3 feet from the ball-carrier
Because the court is completely surrounded by netting, there is no ‘out-of-bounds’, adding a dimension and tactics not available to traditional netball

Junior Netball:
We have a junior netball competition on Tuesday afternoons, the games start at 4.30pm and go through until 6pm.

When can I play Indoor Netball? 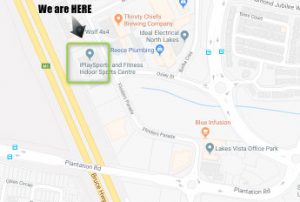