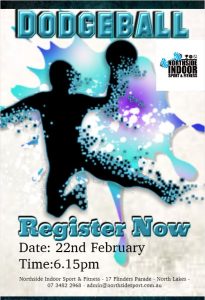 Dodgeball is a fun and enjoyable game that is great for all ages. The object of the game is to hit the other team members with the ball so that your team is the last standing. As the saying goes “If you can dodge a wrench you can dodge a ball”. Get your team together now as spots are filling, call the Northside Indoor Sport team for more details on (07) 34822968 or email admin@northsidesport.com.au

THE GAME
The object of the game is to eliminate all opposing players by getting them “OUT.”

This may be done by:

Hitting an opposing player with a LIVE thrown ball below the shoulders.
Catching a LIVE ball thrown by your opponent before it touches the ground or net.
Definition: LIVE: A ball that has been thrown and has not touched anything, including the floor/ground, another ball, another player, official or other item outside of the playing field (net, roof etc)

THE TEAM
Teams will be made up of 5 players. Five (5) players will compete on a side; others will be available as substitutes. Substitutes may enter the game only in the case of injury. Teams may have a different 5 players for the start of each end.

THE FIELD
A single court is used and is divided into two (2) equal sections by a centre-line and attack-lines 3 m from, and parallel to the centre line, with a retreat line 3 m from the back netting.

THE EQUIPMENT
The official ball used in league play will be an 8.25” rubber-coated foam ball.

BOUNDARIES
During play, all players must remain within playing area (between the attack and retreat lines). Once dodge balls have been retrieved no player is to pass over the attack lines or behind the retreat line or back net. Players who are ‘out’ by a ball must leave the court immediately. Players may only enter the safe zone to collect balls and must immediately return to the playing area.

START OF PLAY
Each team starts with ONE (1) ball and then there are THREE (3) balls evenly spread on the centre line at the beginning of each game. It is a sprint to the THREE (3) balls once the play begins. There is a five (5) second grace period after the initial rush before balls can be thrown.
Each team member must start with one hand on their back wall. Play begins on the referee’s signal of “Go” and “Dodge” after the five (5) second grace period after the initial rush.

SCORING AND WINNING A GAME
The first team to legally eliminate all opposing players will receive 1 point. Teams then return to the court to start again. The team with the greatest contest wins after 4 x 9-minute quarters is declared the winner.

TIMING
Teams will swap ends at the end of each quarter. Each quarter runs for 9 mins with a 2 min break for half time.

SUBSTITUTIONS
Substitutions may only be made at the end of each contest. Substitutions are allowed for injured players.

5-SECOND VIOLATION
IN ORDER TO REDUCE STALLING, A VIOLATION WILL BE CALLED IF A TEAM IN THE LEAD CONTROLS ALL FIVE (5) BALLS ON THEIR SIDE OF THE COURT FOR MORE THAN 5 SECONDS. THIS ALSO APPLIES TO TIED TEAMS.

RULE ENFORCEMENT
Rules will be enforced primarily by the “honesty system” *. Players will be expected to rule whether a hit was legal or whether they were legally eliminated. All contests will be supervised by a court referee*. The court referee’s responsibility will be to rule on any situation in which teams cannot agree. THE COURT REFEREE’S DECISION IS FINAL – NO EXCEPTIONS.

NORTHSIDE INDOOR SPORT & FITNESS CODE OF CONDUCT
Understand, appreciate and abide by the rules of the game.
Respect the integrity and judgement of game officials and NORTHSIDE INDOOR SPORT staff.
Respect your opponent.
Be responsible for your actions and maintain self-control.
Do not taunt or bait opponents and refrain from using foul or abusive language.